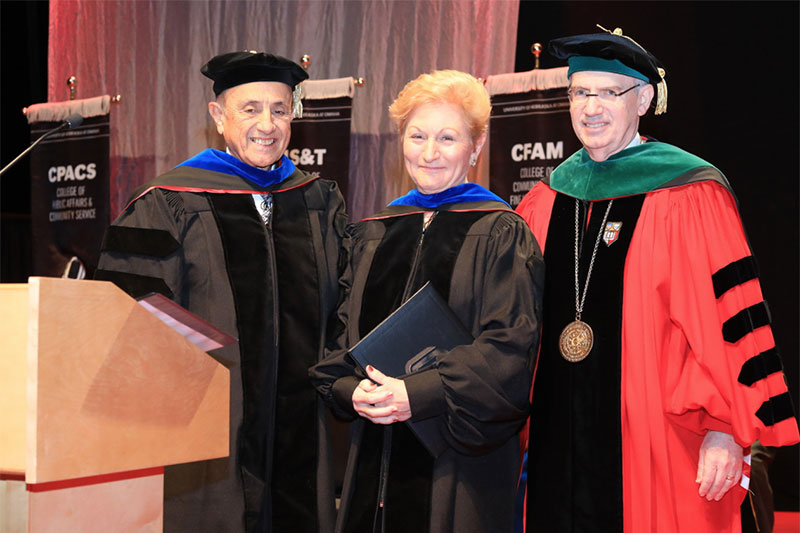 Gail Walling Yanney, left, with Chancellor Jeffrey Gold, right, and Michael B. Yanney. The Yanneys received an Honorary Degree at the December 2017 Commencement.

Gail Walling Yanney, M.D.  and Michael B. Yanney received Honorary Doctor of Humane Letter Degrees from the University of Nebraska Omaha on Dec. 14 at the December 2017 Commencement Ceremony.

Gail Walling Yanney, M.D. is a graduate of the University of Nebraska College of Medicine. She served as a clinical instructor at the College, and was as an anesthesiologist at Bishop Clarkson Memorial Hospital.  Dr. Walling retired from practice in 1986.

Michael B. Yanney is a graduate of the University of Nebraska at Kearney and the Wisconsin University School of Banking. He has worked in the business and investment industries for over 58 years. Mr. Yanney founded The Burlington Capital in 1984, formerly America First Companies L.L.C., and currently serves as Chairman Emeritus.

Dr. Walling Yanney has served on a number of professional and community boards, including the Olson Center for Women’s Health Advisory Board, the Nebraska Medical Center Board of Directors, and was president of the University of Nebraska College of Medicine Alumni Board.

She has been recognized for her community involvement with numerous awards including the YWCA Woman of Distinction Award (Professions), Arthritis Foundation Woman of the Year, University of Nebraska-Lincoln Alumni Achievement Award, NCCJ Humanitarian Award, the Ambassador of Hope Award, and Partners in the Arts – Governor’s Arts Award.

He has significant experience in the development and operation of agribusiness projects in Russia and other countries of the former Soviet Union, having been involved in a total of more than 40 agricultural related projects there over the last 30 years.

Together, the couple has chaired numerous local and national charitable drives. Recently they chaired the “Unlimited Possibilities” Campaign for the University of Nebraska Foundation, which included the Fred and Pamela Buffett Cancer Center.  The couple received the 2012 Citizens of the Year by the United Way of the Midlands, The Girls Inc. Angel Award, and the Richard & Mary Holland Leadership Award.

The Yanneys believe that success is not measured in what is collected but in what is given. They have generously given their time, energy, and resources to countless civic and community initiatives focused on the arts, health and education.

They are the parents of Lisa Y. Roskens, Chairman & CEO of Burlington Capital.