UNO’s newest Chancellor, Jeffrey P. Gold, M.D., has gone by many titles: a doctor, an administrator, an educator, a leader, a dream maker and, now, he's a Maverick 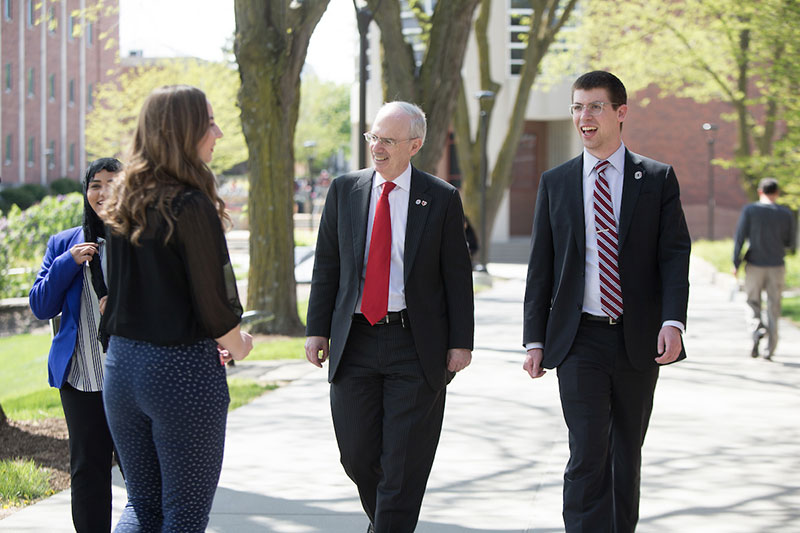 Gold takes over for Chancellor Emeritus John Christensen, Ph.D., who retired after leading UNO for more than decad. And though he new oversees two premier Omaha institutions—one medical and one metropolitan—it appears this is something Gold has been preparing for his entire life.

Growing up in New York City, Gold’s formative years were much like that of many UNO students. He and his brother, Peter were born to working-class parents, Arthur and Geraldine, and were two of the first in their family to go to college.

Even before graduating high school, Gold was set on pursuing higher education by any means possible. He did so by enrolling at Cornell University on an engineering scholarship.

Despite being drawn to medicine from a young age, he knew that getting that first foot in the door would be all it took to prove himself and accomplish his goals.

"I studied what was called, in those days, Applied Theoretical Mechanics all the while earning the pre-medical requirements, never giving up my dream to go to medical school," he says.

Throughout his educational career, which included graduating top of his class in Cornell’s Weill College of Medicine, Gold took every opportunity he could to engage in research and teaching—even as an undergraduate.

Flash forward nearly 40 years and it's easy to see that Gold has applied that same tenacity and drive throughout his career.

Beginning with his residency at New York Presbyterian’s Memorial Sloan Kettering Cancer Center and through his role as Chancellor and Executive Vice President of Biosciences and Health Affairs at the University of Toledo (prior to coming to Omaha), Gold has accumulated an impressive legacy as a surgeon, a community leader and educator.

And yet, he is most proud of earning the title of "grandpa" following the birth of twins—a boy and a girl—from his son and daughter-in-law late last year.

"They have really changed our lives in many different ways," he says. "And, of course, from a family perspective being a new grandparent I never thought much about what it would meant to be called grandpa, but it turns out I really like it and it’s given me a renewed perspective on why is it that I do what I do, what are the contributions that we are going to make as a great university, in education, in healthcare, in community outreach, in research and science, to make their world a better world."

It is that same selflessness and commitment to improving the lives of future generations that has so impressed a number of UNO faculty and students.

"His investment in UNO started well before his role as chancellor," says Paul Davis, Associate Professor of Biology. "His visionary support of various UNO-UNMC pipelines, including those designed to diversify the Omaha healthcare community, has been a blessing to students and community partners."

Davis has worked closely with the College of Medicine at UNMC to create the Urban Health Opportunities Program (UHOP), which launched this past August and provides a direct pipeline to medical school at UNMC for students who want to provide healthcare to underrepresented communities.

"Chancellor Gold has demonstrated time and again the need for programs and offerings to be student-centered and community-lifting," Davis adds. "This is a leadership focus that is highly valued at UNO, and every expectation is that he will carry these values over as the new chancellor."

You surround yourself with the very best people, make sure they have the resources they need, stay out of their way and then bask in their reflected glory

Additionally, a number of faculty at UNO have joint appointments at UNMC, including Nick Stergiou, Director of UNO’s Biomechanics Research Building. It is because of those close partnerships that UNO has been able to secure millions in research grants from federal entities like the National Institutes of Health.

“I don't believe we have any grant or a project in biomechanics where we don't work with UNMC,” Stergiou says. “Chancellor Gold is an amazing leader and visionary. During his time here, the ties between the UNO Biomechanics and UNMC have been further strengthened.”

UNO Student Body President Carlo Eby has already had several meetings with Gold and knows that he is committed to a strong student experience.

“Chancellor Gold is not afraid to ask tough questions, but it's all with the intention to set this university on the path of continued success,” he says. “He demands excellence from himself, and in turn, others around him seem to elevate their game to match his level of professionalism. He makes those around him want to be the best they can be, and that's a great attitude and energy to have on campus.”

Chancellor Gold says that, as leader of both UNO and UNMC, he foresees countless other opportunities - including everything from the hard sciences to athletic training to rural community engagement - that will help students achieve their dreams and improve the lives of citizens in Nebraska and around the world.

To achieve these goals Chancellor Gold says he will continue to rely on the most important piece of advice he’s ever received, when he was first named Dean at the College of Medicine at the Medical University of Ohio more than a decade ago:

“You surround yourself with the very best people, make sure they have the resources they need, stay out of their way and then bask in their reflected glory. Whether it’s our students, our patients, our faculty, our staff – anything I can do to make their dreams come true is to the betterment of our community. And, of course, to the betterment of their life.”

This article appeared in the UNO Magazine - the flagship publication of the University of Nebraska at Omaha, for alumni, faculty, staff, students, donors and friends of UNO.

The most current issue is located online.