The JPII Newman Center offers housing for 162 students in 41 apartment-style rooms. Students living at the Newman Center have access to a library, oratory, and lots of activities and programming focused on campus ministry and faith formation as well as dinners, activities and speaker series. Located at 71st and Pacific Streets (1221 S. 71st St.), it is convenient for UNO students both at nearby Scott Campus as well as Dodge with a direct shuttle route.

Chancellor Jeffrey Gold sat down with Father Joe Taphorn to learn more about the facility and what it has to offer during a tour in mid-April. 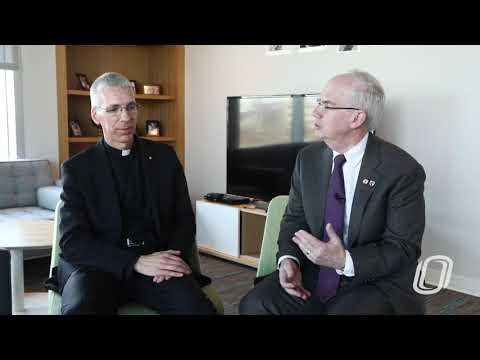 Recap of the Interview

Chancellor Jeffrey Gold received a tour from the Rev. Joseph Taphorn Tuesday, April 17, including the beautiful St. John Paul II Oratory. He was joined by Archbishop George Lucas, the Rev. Andy Roza as well as the City of Omaha Mayor's Chief of Staff Marty Bilek.