Do You Know UNO? Hayden House, A Campus Curiosity

A wealthy Omaha family, an uncrackable safe, and a growing campus are all part of the nearly century-old history of UNO's Hayden House.

A photo of Ophelia Hayden's home shortly after it was built in 1926. Today, it serves as home to several student learning communities and has stood as a campus icon for nearly 50 years.

A stroll around the University of Nebraska at Omaha’s picturesque campus reveals the expected blend of academic buildings of various eras, residence halls of a surprisingly recent vintage and athletic venues both old and new.

But on the west end of the Dodge Street Campus, nestled under old-growth trees and framed by a wrought-iron fence, sits a building that would seem to be out of place to a first-time visitor. In fact, Hayden House is actually one of the last vestiges of a neighborhood that once bordered the western edge of campus. 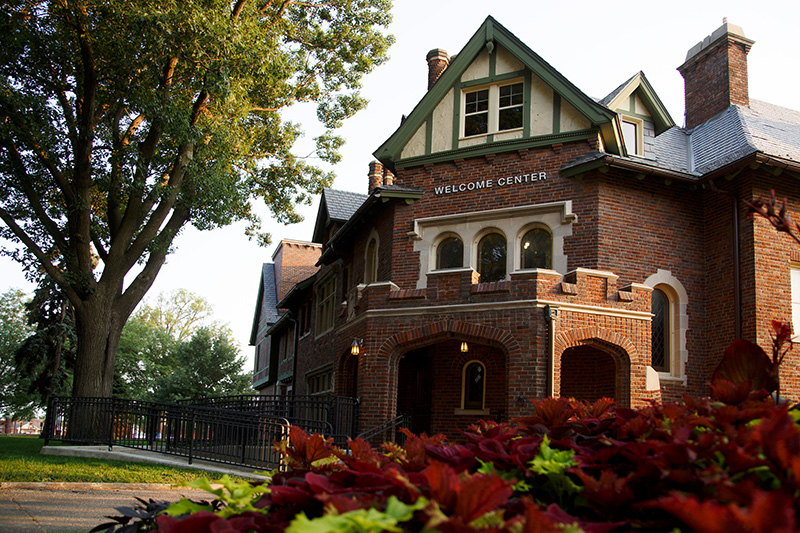 “It was a neighborhood of very well-to-do individuals who lived in this community of about three blocks by two blocks, and people knew each other,” said Les Valentine, the university’s archivist. “And there were beautiful houses all of a distinct design. And there was a history that went with each house.”

In the case of Hayden House, it was built in 1926 by Ophelia Hayden and her widowed mother at a cost of $81,000. Hayden was from a family that owned the Hayden Brothers department store in Omaha, and her sister, Mary Storz, lived in the nearby Storz mansion that sat where the Thompson Alumni Center is located today.

When Hayden died, her home was willed to the Duchesne College Convent of the Sacred Heart. The property was never used and, shortly after its acquisition, it was in turn sold to UNO in August of 1973 and became known simply as "Annex 24," one of several acquired homes in the neighborhood that took on a similarly utilitarian name.

The College of Public Affairs and Community Service (CPACS) was created in the early 70’s, and its many units were scattered across these acquired homes on the campus’ west end. Hayden House was the original office of the college’s dean.

“The third floor used to be a ballroom,” recalled B.J. Reed, who retired from his role as senior vice chancellor for academic affairs in May 2019. Reed had also previously served as dean of CPACS, from 2001-2011, and had an office in Hayden House for much of that time. “When I was dean, there was still not enough space [for faculty and staff] so the third floor was converted into offices.

“And, it was quite the experience to be in those old houses with the offices and the bathrooms being gerrymandered because they were taking bedrooms and other kinds of things and turning them into offices.”

Hayden House retains some of its distinct residential features, including a hitching post outside the entrance, a safe in one of the walls and other hidden panels. A 1930’s-era kitchen was among other glimpses of the past that were removed during a renovation of the building in the early 2000’s.

Eventually, CPACS was able come together under one roof when it moved into its current home in 2008.

For a time, Hayden House would serve as UNO's "Welcome Center" for prospective students before the opening of Maverick Landing on Scott Campus in 2017. Today, it houses the leadership offices for Student Success as well as learning communities like Project Achieve, the Success Academy and the First-Generation Guild.

No matter its use now or in the future, Hayden House today is that campus curiosity that reminds us of some of the earliest days of UNO in its current location.

“When you look at that building from the sidewalk west of the Weber Fine Arts Building and you look at that building surrounded by trees and beautiful yard and a fence, you get a picture of what that whole neighborhood was like,” said Valentine. “And that picture is behind you too…to where the east side of where the library is. That whole area was the neighborhood that looked a lot like the grounds around the Hayden House.”

Call it a nod to the past on a campus that is forever moving forward.