The University Choir is a non-auditioned ensemble open to all UNO students, faculty, and staff. The 60-plus singers involved in this group perform hallmark choral works such as Gloria by Vivaldi and Handel’s Messiah. This ensemble is designed to meet the music needs of singers who wish to continue their choral experience. It is a performing organization that has varied programming, but emphasizes larger choral works. There are two sections of University Choir. Section 1 meets Tuesdays and Thursdays at noon and is for Soprano/Alto singers. Section 2 meets on Mondays and Wednesdays at noon and is for Tenor/Bass singers. Students can take up to three semesters of University Choir and receive General Education credit.

The UNO Concert Choir is a 55 - 60 voiced auditioned ensemble of students from all majors across the University of Nebraska at Omaha. In addition to campus and local performances, the Concert Choir has performed in Lithuania, Sweden, Germany, the Czech Republic, Romania, Moldova, Russia, Holland, Brussels and Finland. The Concert Choir returned to Lithuania in the Spring of 2018. During this trip, they performed at several cultural centers, schools, and historical sites throughout Lithuania and the choir appeared on the national Lithuanian morning show Labas Rytas, Lietuva. The Concert Choir was selected to perform at the 2018 Nebraska Music Educators Association State Conference.

The UNO Concert Choir competed in the 2021 Rovdo International Choral Competition in Minsk, Belarus. The event, which was held virtually due to COVID, brought together 68 choirs from seven different countries. The event had 1860 singers in seventy-seven performances in eight various categories. The UNO Concert Choir earned a third place finish in the performance category, a Laureate Diploma I for high scores, and a Special Diploma for the best artistic performance according to the COVID measures of the country. 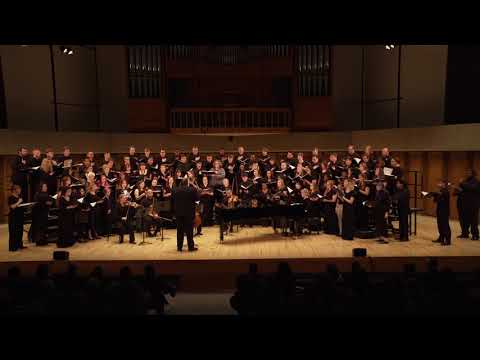 Seven Last Words of the Unarmed by Joel Thompson

Chamber Choir focuses on integrating entrepreneurship, student leadership, and collaboration into the presentation of choral music across a variety of genres. Students wishing to participate in this ensemble must be strong, independent musicians with an interest in learning how to stretch the boundaries of choral music. Students will leave this course with the skills to better communicate with their musical colleagues, create publicity content, and develop a musical experience that communicates aspects of the human experience through choral music. This choir is limited to 8-12 voices.