“You need to create a unity of purpose and a unity of effort . . . ‘1000 points of light are all well and good’, but sometimes we have to take those 1000 points and turn them into a laser beam.”

Booz Allen executive vice president Thad Allen is a leader in the firm's Departments of Justice and Homeland Security business in the civil market.

He leads the development of thought leadership and client engagement regarding the future direction of law enforcement and homeland security. He is known for his expertise in bringing together government and non-government entities to address major challenges in a "whole of government" approach designed to achieve a unity of effort. Allen completed his distinguished career in the U.S. Coast Guard as its 23rd Commandant.

In 2010, President Barack Obama selected Allen to serve as the national incident commander for the unified response to the Deepwater Horizon oil spill in the Gulf of Mexico. Working closely with the U.S. Environmental Protection Agency, DHS, the Departments of Defense, Interior, Commence, and Health and Human Services, state and local entities, and BP, he sought to bring a unity of effort to response operations.

Prior to his assignment as commandant, Allen served as Coast Guard chief of staff. During his tenure in that position, in 2005, he was designated principal federal official for the U.S. government's response and recovery operations in the aftermath of Hurricanes Katrina and Rita throughout the Gulf Coast Region.

Other Coast Guard Assignments included commander, Atlantic Area, where in 2001 he led the Coast Guard's Atlantic Area forces following the September 11 attacks. He previously served as commander, Seventh Coast Guard District, where he oversaw all operations in the southeastern United States and in the Caribbean.

Prior to joining Booz Allen, Allen served with the Rand Corporation.

He is a Fellow in the National Academy of Public Administration and a member of the Counil on Foreign Relations. Allen also currently serves as the director on the Coast Guard Foundation and Partnership for Public Service. New York Governor Andrew Cuomo appointed Allen to the New York State Respond Commission tasked with finding ways to ensure that New York State is ready to respond to future weather-related disasters.

He is a 1971 graduate of the U.S. Coast Guard Academy. He holds a Masters in Public Administration from the George Washington University--from which he received the Alumni Achievement Award in 2006. He also holds an M.S. in management from the Sloan School of Management at the Massachusetts Institute of Technology. Allen has been awarded honorary doctorate degrees from George Mason University, the National Defense University, and the National Graduate School. 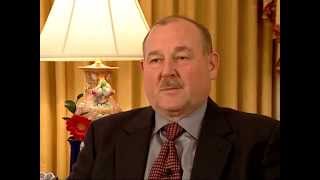