“In the past, the link between our resources and services was absolutely direct. We don’t have that now. I think it’s important that we find our way back to that.”

Earlier in his career, Mr. Silva served with the Association of Bay Area Governments, and the Council of Intergovernmental Relations. He was also Chief Fiscal Advisor to the President of the California State Senate for 13 years, and a Senior Advisor on governmental relations to the Public Policy Institute of California for 10 years.

From 1994 to 1996, Silva was executive secretary to the California Constitution Revision Commission, where he directed the staff work and wrote the final report of the Commission. He was also chief consultant to the Senate Local Government Committee from 1975 to 1981.

He has authored nearly two dozen publications and commentaries on government fiscal issues in California.

In 2013, the Sacramento Chapter of the American Society for Public Administration (ASPA) name recognized Silva’s contributions to the state by awarding him the Ross Clayton Lifetime Achievement Award. 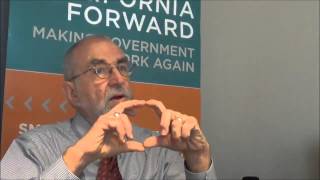