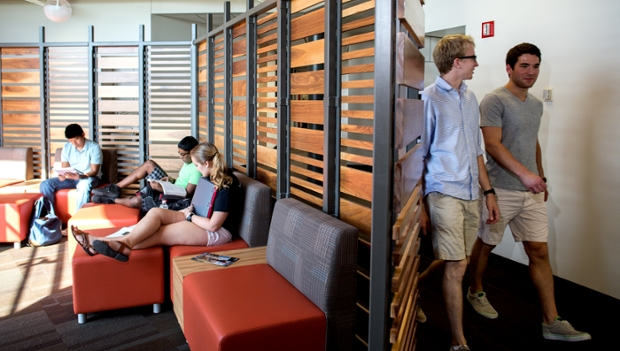 All events take place at UNO's Pacific Street location at the Peter Kiewit Institute Building, 1110 S. 67th St. All events are free and open to the campus community and public. For more information, call Leigh Choi at 402.554.2423.

In recognition of Computer Science as a driver of innovation and economic growth, the U.S. Congress has passed resolution H.Res. 1560 supporting the designation of National Computer Science Education Week. The resolution was meant to raise awareness of the crucial role Computer Science has played as the foundation for today's technological innovations, as well as the need to educate future generations of computer scientists.

The critical importance of computers in modern-day society cannot be underestimated. More people than ever bank, shop, and make friends online. Software is in everything from cell phones and pacemakers to cars and aircraft. Education in computer science provides the theoretical understanding and practical mastery of computers necessary to design and engineer such sophisticated software-controlled systems. In today's high-tech society, technological progress equates to economic progress. Nations that are able to capitalize on such technologies will have a formidable advantage in tomorrow's economy.

Due to the tremendous impact of computer science, it is of vital importance to develop a world-class workforce that can sustain the pace of technological innovations. According to data from the U.S. Bureau of Labor Statistics, computer-related jobs are projected to have the highest growth in the next decade, compared to job projections from other STEM (science, technology, engineering, math) fields. The accompanying bar graph compares job projections for different STEM fields.

The jobs projection data is good news for computer science students. Unfortunately, the graph also indicates a likely shortfall in computer science graduates qualified for these jobs. This is reinforced by the decreasing trend in computer science and computer engineering degree production shown in the accompanying line graph, as reported by the Computing Research Association.

There are several contributing factors to this decline, among them the decreasing interest among students at all levels of education and the disproportionately smaller number of women and minorities entering the field.

In light of these challenges facing computer science and the critical importance of educating new generations of technology workers, Congress passed the resolution designating the week of December 9 as National Computer Science Education Week. This resolution supports activities to improve computer science education at all levels and broaden the participation of underrepresented groups in computer science.

Why are we celebrating CSEdWeek in December?

This week was chosen in honor of Grace Hopper, whose birth anniversary is on December 9. She was a pioneer in the field of computer science. One of the earliest computer programmers, she is credited with coining the term "debugging" for the process of finding software faults. Her research accomplishments include the creation one of the first programming language compilers and contributions to the design of COBOL, the earliest programming language to come into widespread use for business applications. She received a Ph.D. in Mathematics from Yale and was a U.S. Naval officer.

Where the jobs will be