Join us for this Constitutional Studies Forum event presented by Diana Schaub, Ph.D., Professor of Political Science at Loyola University Maryland on March 30. 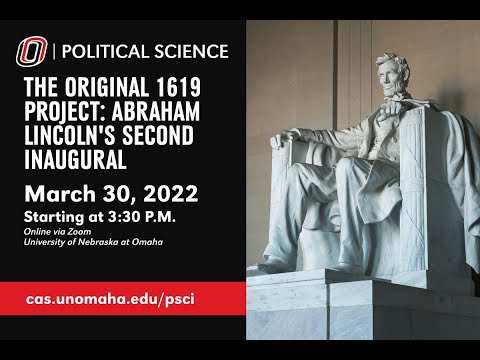 "The Original 1619 Project: Abraham Lincoln's Second Inaugural" was presented on March 30, 2022 by Diana Schaub, Ph.D., Professor of Political Science at Loyola University Maryland and a non-resident Scholar at the American Enterprise Institute.

About the Speaker: Diana Schaub is Professor of Political Science at Loyola University Maryland and a non-resident Scholar at the American Enterprise Institute. She was the Garwood Teaching Fellow at Princeton University in 2011-12 and Visiting Professor of Political Theory in the Government Department at Harvard University in 2018, 2020, and 2022. She is the author of a book on Montesquieu, along with many scholarly articles in the fields of political philosophy and American political thought. She is a coeditor (with Amy and Leon Kass) of What So Proudly We Hail: The American Soul in Story, Speech, and Song. A member of the Board of Directors of the Abraham Lincoln Institute, she also sits on the publication committee of National Affairs. Her book on Lincoln’s rhetoric and statesmanship, His Greatest Speeches: How Lincoln Moved the Nation, appeared in 2021 from St. Martin’s Press.

Sponsors: This event is sponsored by the Constitutional Studies Forum of UNO’s Department of Political Science with the support of the Jack Miller Center.